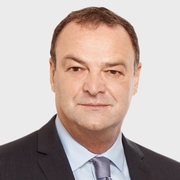 Joseph Amiel represents the Association québécoise des pharmaciens propriétaires (AQPP) on the CPhA Board of Directors. He graduated with a degree in biochemistry from McGill University in 1976 and received his pharmacy degree from the University of Montreal in 1980. Joseph joined the AQPP Board of Directors in 1994. He has been a vice president since 2003 and chairs the negotiating committee. He also served on several CPhA committees from 1997-2002, including the industry affairs committee. Joseph owns three pharmacies in the Montreal area. He is a founding member of Centre de Recherche et d’Aide pour Narcomanes (CRAN) and is currently serving as the CRAN president. Very active in development and promotion of methadone programs in the province of Quebec since 1980, Joseph is currently working on the new methadone and suboxone guidelines for the Ordre des pharmaciens du Québec (OPQ).